Interview with Simon Brossard from Lemlist 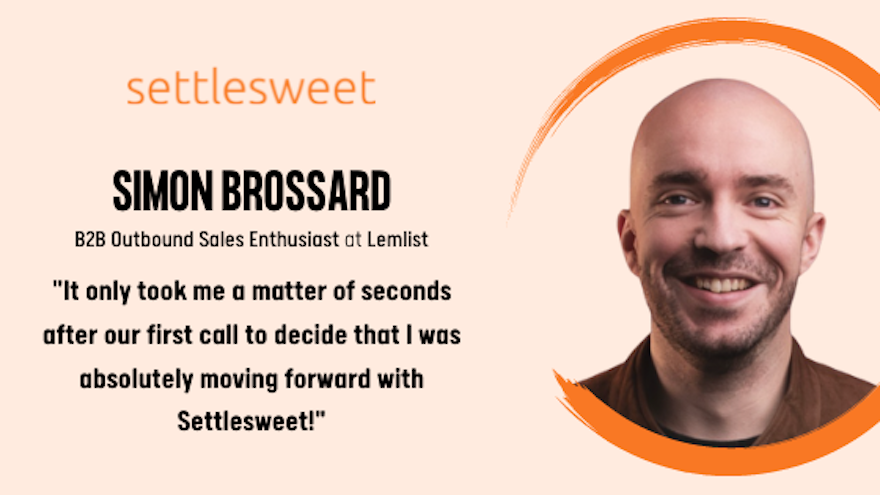 Our CEO, Guillaume Seiler & B2B Outbound Sales Enthusiast at Lemlist, Simon Brossard came together to discuss Simon's experience in finding a flat in Paris and his experience with Settlesweet.

Where were you at the starting point of your home search?

To give some context, at the beginning of 2020, I had already been living in Paris for four years. For almost a year and a half, in January 2020, I had an acquisition agency with two partners where we managed everything remotely. Eventually, the first lockdown made me decide to leave Paris. So I left Paris quite quickly, finally in early 2020, where I returned to my home town where I managed all of my activity with my partners remotely. I had a partner who stayed in Paris, another partner in Lyon and I was in Clermont-Ferrand. So everything was managed 100% remotely. I focused my energy on another passion project that I was working on: acquisition. I came across Lemlist, a French company specialising in acquisition.

There was a job opening for the French market to be the first business developer to conquer and develop this market. So, I made a pros and cons list between continuing my agency, where things were starting to go well (we had begun to take on a little more seriously) but where finally, in the long term, I was still doing the same job. And on the other side of the list, I had the opportunity to join Lemlist, which is already an exceptional company, and which is going to become a leader in its field in the years to come in this very specific subject of automation and acquisition.

So I made the decision quite quickly to at least try to apply so as not to have any regrets. I then had the opportunity to do the various interviews with the partners, with several members of the team, who finally convinced me that it was the best decision for my career to join Lemlist, for a few years at least to continue to develop my skills in this domain and why not take over my project. But I put aside my entrepreneurial adventure to join Lemlist and help them conquer the world and French markets specifically for me.

On September 1st 2020, I joined the Lemlist team entirely remotely from Clermont-Ferrand for the first three months. But things were moving very, very quickly at Lemlist, and I felt the need to be closer to my team. So, at the end of November, I started looking for a flat. I don't know if you want me to go straight to how I heard about Settlesweet?

Yes, let's go on to how you heard about Settlesweet.

So, as I spend a lot of my day networking on Linkedin, I came across a video of Jeremy Goillot praising Settlesweet & talking about his experience. I think it must happen once a year that I click on an ad I see on Linkedin.

But in this case, I was right on target, it obviously spoke to me a lot because Jérémy is a bit like me, so I obviously paid attention. What's more, I knew him a little. We already did a training session a few years ago together. I immediately booked a call with someone from the Settlesweet team for a fortnight later. That's how I first heard about Settlesweet and made the first steps.

Actually this was quite a funny first introduction with Settlesweet. My days are filled with meetings with clients and a lot of onboarding calls. I had an appointment in my calendar for an onboarding of a company, Settlesweet, which I thought was a coincodence because I had booked a call to use your services.

So I start the meeting by taking the lead and talking through what Lemlist can offer, what will happen during the meeting, the usual onboarding protocol. I then see that your employee was looking at me, totally confused, not understanding what was going on. She put me on hold for a couple of minutes to check with her team to see if she'd called the right person! It took me a couple of seconds to realise, "wait... I think I'm talking nonesense, she's supposed to be onboarding me!"

OK, so you were saying, you made the decision to come back to Paris to be closer to the team. Lemlist, what's the policy at the office level?

Up until September 2020, 80% of the team was abroad. We're a fairly international company, but Guillaume, the CEO, decided to set up and structure the French team. So, I have three colleagues who have arrived in marketing team, and we are two business developers plus an office manager who arrived at the beginning of September. So our CEO booked an office at WeWork Lafayette where we are today, and where I'm calling you from today.

OK, so those who are based in France are in Paris and come to the office?

That's right. On the French side, the marketing and sales team often come to the office. For me, even if I'm in Paris now, there will generally be two or three days a week when I work from home. On the other hand, there are two days, when I will always be present in the office. On the other hand, the entire product team is French, all of our developers are French and they are all remote.

We have developers in Montpellier, in Lille, in the Parisian suburbs, who never come to the office. Or rarely, once every 36 months. Even in France, we have a part of the team that is remote which is the product part. The whole marketing/sales team is in Paris with Guillaume and the whole video production team too, which has a big focus here. Apart from that, we have all of the growth, marketing, worldwide acquisition and worldwide sales departments which are located all over the world, especially in Europe.

Yeah, we've got Serbia, Ukraine, Bosnia and a few other countries. I think we have someone in Malta as well, but I'm not 100% sure.

Great, great. To come back to the apartment search part, how did you feel about it? What was your state of mind when you said you had to move back to Paris?

I was in a hurry without being in a hurry, mainly because I wanted to see my team but I knew finding an apartment would be difficult. I have days that last between 9 - 10 hours where I spend three quarters of the time talking with people. With the lockdown, it quickly became weeks that passed in 30 seconds which were quite lonely.

So I had this urgent need to be around people again. I wasn't in a big hurry because I also knew that my criteria was quite picky. I knew I wanted to bring my car so I couldn't have a flat in the centre of Paris but I had a few other needs that were a little difficult to meet.

I wasn't looking forward to the search because I knew that it would be very complicated to do the apartment visits. Getting around during lockdown was really difficult. Going up to Paris and doing 10 visits in a weekend wasn't my idea of a good weekend. I think I started my search a week before I heard about Settlesweet. So I gave up quickly. What I did and what I think advanced things quite a bit with Tony, my HomeMatcher, was that I would check one or two flats every day and bookmark them. As soon as we had the first contact, I threw 10 apartment links at him which met my criteria and I think Tony found the first flat that I put on my wish list. 48 hours later, it was the flat was mine.

What took me the longest was creating my file. I needed guarantors which means I had to manage a few things. Once I had done that, I think that in a total of three days I had received a confirmation that the flat was mine. In terms of speed, it was quite exceptional. I think Tony told me that it was his record in terms of finding an apartment that quickly.

I think it might even be the company record. I know we've done a few in a very short space of time, but it's potentially the fastest. For you, what was the main added value of Settlesweet in this process?

The fact that you manage everything. In concrete terms, I had done the research beforehand, so I sent the links to Tony. Otherwise, it's that you manage everything. You helped me create the file. I just had to send in my documents, you added the bulk of information to the file so that when you send in the file, I knew that my file went to the top of the pile. Of course, theres the fact that it's super simple to contact your Home Matcher. There's no platform where I had to spend hours going through unread messages and so on, it was all handled quickly and efficiently.

It's been simple and frankly, it's been fast. No need to go and do the visits, I just had apartment proposals sent to me via WhatsApp and Tony got back to me very quickly each time. Honestly on the whole operation, it was quite an exceptional experience. If you weigh up a search for a flat that people usually do in Paris, and a search with Settlesweet, there's no comparison, Settlesweet is just better.

Oh and the fact that that the service was free. You are paid afterwards with the Action Logement subsidy, but I didn't even need to worry about that because Settlesweet handled it for me. The decision making was so easy for me and that's how I found my apartment so quickly. It only took me a matter of seconds after our first call to decide that I was absolutely moving forward with Settlesweet!

Thank you again to Simon Brossard for his interview with us, it was a pleasure helping you find your dream home !

If you are currently in the process of looking to move or moving to/within France, Settlesweet can help you find accommodation quickly and effortlessly. Our service is covered by a grant from Action Logement! To find out more, click here.